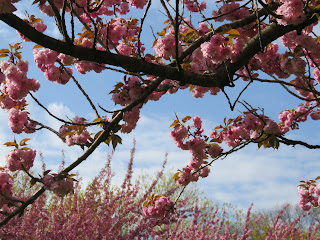 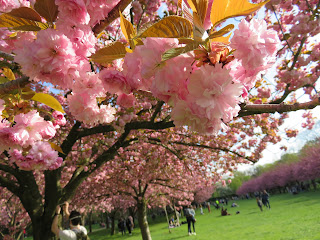 April is the month that the cherry trees bloom in Brooklyn. The Brooklyn Botanic Garden has a brilliant collection of cherry trees. Cherry blossoms are in bloom for just a few weeks when they are in season. I try to see them yearly, but normally I manage to see only a few trees in full bloom. Usually there is a cherry blossom festival at the Brooklyn Botanic Garden but due to the pandemic its been cancelled. I do not mind. There were many people who came to see the beauty of the cherry blossoms, but it was not as crowded as it is during the cherry blossom festival . I liked it better this way.
Posted by frum single female at 12:10 PM No comments:

This is so awesome!! If people would just sing together there would be more peace in this world. I just LOVE the energy in this video. I feel like there are a lot of kind hearted people in this world but they are not being highlighted. Therefore I am going to help spread some light and shared this lovely ray of sunshine. Your welcome.
Posted by frum single female at 1:23 AM No comments:

In many generations there have been global health crises and there has in the past been widespread vaccines for them. Sometimes the vaccines and treatments remained safe throughout time, sometimes they have not. In life there are no guarantees, one just has to make an eduacated decision for one's self. With Covid-19 there are already at least 3 vaccines available and many other therapeutic treatments. So much propaganda has been released that one does not really know which is the right thing to do. In reality Covid-19 is a nursing home disease and does not really severely impact younger people . Eventually the Covid-19 will be like the flu shot even though currently it it has been hyped up to bubanic plaque status. There have been a lot of conspirisies about the vaccine which I find extremely facinating. The government does not seem organized enough to carry out the intricate nefarious schemes they are churning. I do think that someone would like to carry these schemes out I just think those in charge are buffoons so we are all safe.
Posted by frum single female at 11:18 AM No comments:

Email ThisBlogThis!Share to TwitterShare to FacebookShare to Pinterest
Labels: vaccines 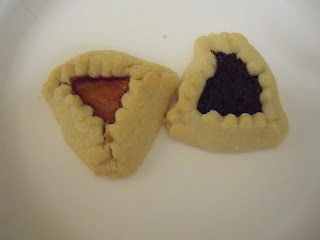 Purim is one of my most favorite holidays. Even with the isolation of the pandemic I am still feeling the impending joyousness of the upcoming holiday. The beginning of this horribel plandemic started right before Purim last year which was before the mask edict was invoked. We have been wearing masks since right before Pesach. I for one do not plan on wearing a mask any longer than necessary. Masks have made NYC into a colder society than it was to begin with. No smiles indoors. Its harder to hear what people are saying and more importantly its harder for others to hear me. Sometimes it feels easier not to speak to people because its hard to hear them and its hard for them to hear me if both of us are wearing masks. I think that masks create division. Masks on Purim can be fun , but many Purim masks do not cover one's mouth. Eyes are the mirror of the soul but its a lot easier to hear what people are saying if one can see someone's mouth while they are speaking. I am hoping soon the masks will be removed and peace and harmony will return.... One can only hope... Happy Purim!!
Posted by frum single female at 12:43 AM No comments:

I had the delight of watching this documentary yesterday. I saw it mentioned in A.M. NY . The picture of the siblings drew me in. Somehow it seemed it was a recent photo of Jewish siblings and not a photo of children from seventy years ago. I went to amazon and watched the film. Its a heart warming story about a family who were saved from certain death during World War II. What a story it was. It reminds the wokesters that most Jewish families came to the United States because they were fleeing persecution and not because they just wanted to switch countries.
Posted by frum single female at 5:12 PM 2 comments:

Email ThisBlogThis!Share to TwitterShare to FacebookShare to Pinterest
Labels: holocaust

Inauguration day is so full of hope for the president and its often all down hill after that as presidents are human. I hope that it is different this time but I am afraid that it will not be.

One fun fact I heard today is that George W Bush, Bill Clinton and Donald Trump were all born the same year. I have also heard that deaths come in threes.

As many fear the dissolution of America due to irreconcilable differences I pause to remember how when Ronald Reagan was running for president everyone thought he was  old to run for president at 69 and how in 2016 the candidates were both 70 and age was never the issue and how this year with a 74 year old candidate and a 78 year old candidate age was not given much thought.  Seems that ageism in politics  has faded, coincidentally more than intentionally.

Is the rising age of our presidents a sign that things aren't working? They say that wisdom comes with age, but does it seem our elder politicians are wiser or does it  seem that they are more senile or stubborn or cranky? Is it that younger people see the folly in Washington and are opting out of politics?

When I was younger and watched presidential inaugurations it did not seem that chaos followed.  Then again, I wasn't paying attention to the news then.

I pray that things get better regardless of whether or not I watched the inauguration. I pray that those who have been trying to divide the United States for the past 12 years stop. 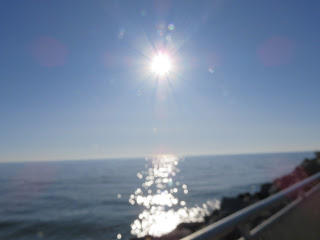 Posted by frum single female at 12:06 AM No comments: 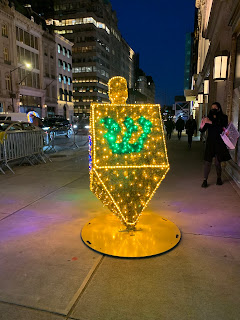 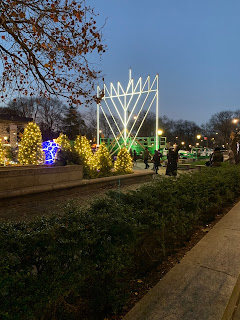 I haven't had much inspiration lately. Hasn't been a good year for blogging. I feel so paralyzed in time. Keep looking forward to going back to normal and breathe normally.